NPT Review Conference
Be joyful in hope, patient in affliction, faithful in prayer – Romans 12:12
The Nuclear Non-Proliferation Treaty Review Conference was due to be taking place this month but has been further postponed due to COVID – now due to take place in August. On what should have been the start of the Conference the five nuclear-armed states (China, France, Russia, UK and US) issued a joint statement, the first one on this issue, reaffirming that “a nuclear war cannot be won and must not be fought”. While the words are welcome, they are at odds with the deeds of the states, all of whom are either expanding or modifying their nuclear arsenals, or both.

Iran Nuclear Deal
Do not be anxious about anything, but in every situation, by prayer and petition, with thanksgiving, present your requests to God – Philippians 4:6
Talks around the Iran Nuclear Deal have resumed in Geneva this month, with some taking part sounding positive that a deal could be reached to restart the agreement, which was originally negotiated in 2015 but violated by the Trump Administration. Meanwhile Israel has said that it will not be bound by any deal resulting from the talks and reserves the right to take unilateral action.

Treaty on the Prohibition of Nuclear Weapons
But truly God has listened; he has attended to the voice of my prayer – Psalm 66:19
There were three new states joining the Treaty in December as Peru, Mongolia and Guinea-Bissau took the total number of ratifications to 59. There are still a further 27 states who have signed but not yet completed ratification. It is still hoped that the First Meeting of States Parties will take place in March, where those who have ratified the Treaty will be joined by observers including Germany and Norway.

Peace work in 2022
Therefore, since we have a great high priest who has ascended into heaven, Jesus the Son of God, let us hold firmly to the faith we profess – Hebrews 4:14
2022 promises to be another busy year for Christian CND and all those working for peace in the UK and further afield. Along with the First Meeting of States Parties of the TPNW and the Non-Proliferation Treaty Review Conference we plan to attend Christian festivals in the UK including Big Church Day Out and Greenbelt. 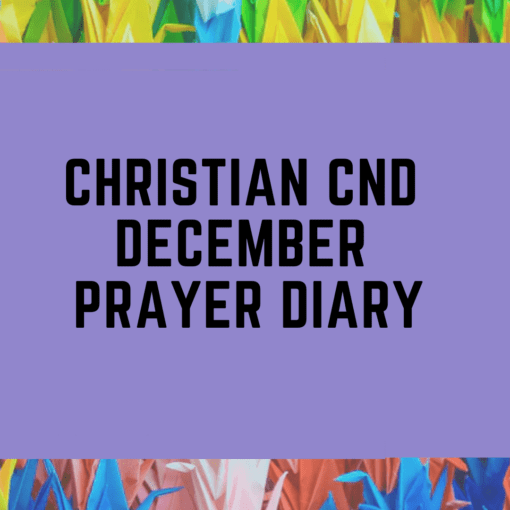