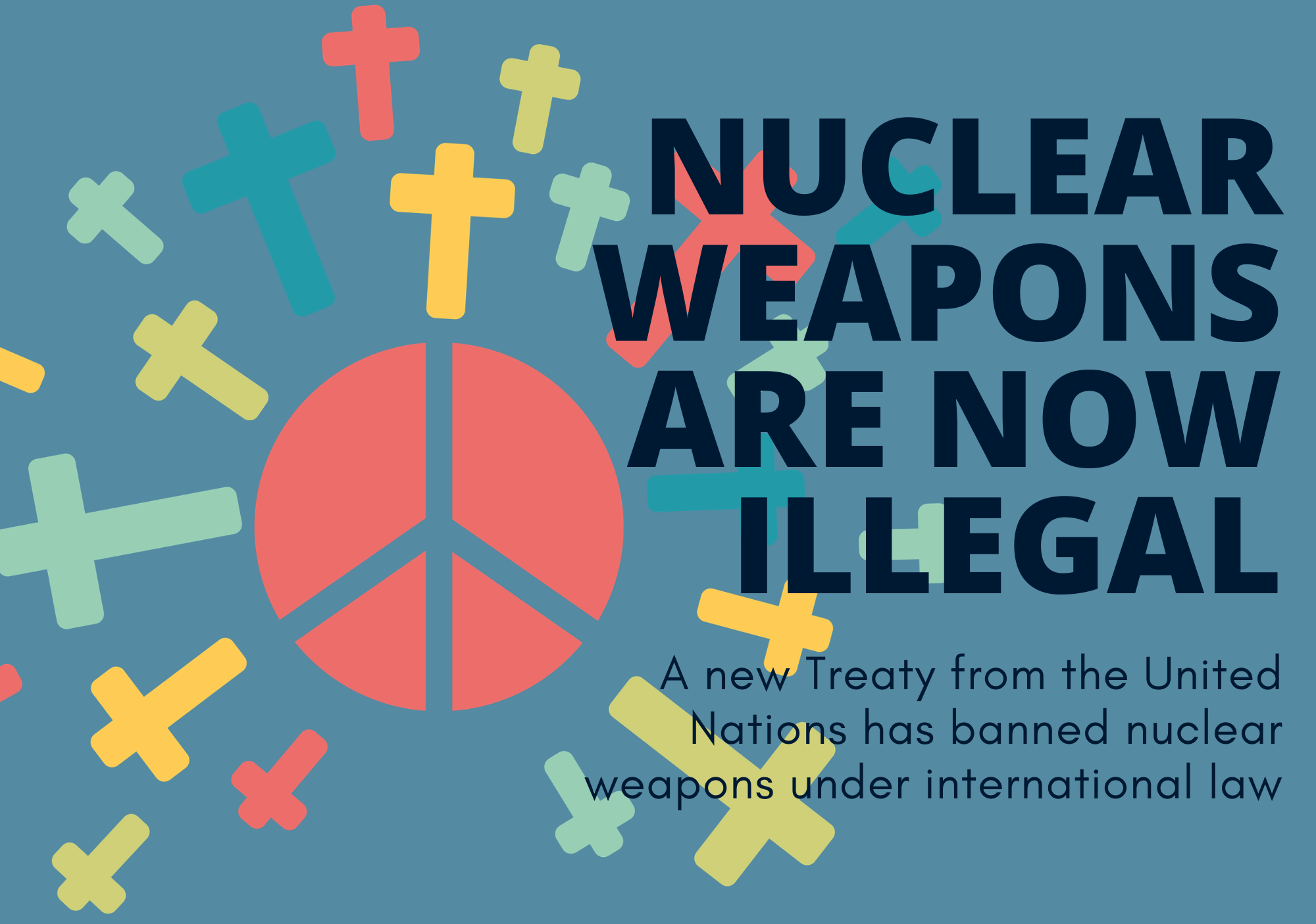 On Friday 22 January 2021 the Treaty on the Prohibition of Nuclear Weapons (TPNW) entered into legal force and made nuclear weapons illegal under international law. The Treaty is the result of decades of campaigning and years and diplomatic negotiations, an international effort by politicians and civil society which demonstrates the strength of opposition to nuclear weapons globally.

There have been calls for nuclear weapons to be banned ever since their first use against Japan in 1945. The indiscriminate nature and the catastrophic humanitarian consequences of their use is well documented, and the International Committee of the Red Cross has said there is no way any medical system in the world could cope in the event of a nuclear blast.

Christian CND is proud to have been involved in these calls both in the UK and through our partnership with the International Campaign for the Abolition of Nuclear Weapons. ICAN was a driving force behind the Treaty, receiving the Nobel Peace Prize for its work in 2017.

As we celebrated the Treaty entering into force, Christian CND gathered with friends from the Network of Christian Peace Organisations for an online celebration with contributions from around the UK and South Korea, where our friends in the Bargn Nuri Community have lived for years under the threat of nuclear war.

Whilst the entry into force of the Treaty is a landmark event and a cause for pause and celebration, there is still much more work to be done. Christian CND, alongside wider civil society in the UK, is redoubling efforts to bring the UK to the table and rid the world of nuclear weapons once and for all. But we can’t do it without the support and prayers of people who share our vision for a nuclear weapons-free world.

Many Christian traditions and denominations in the UK have supported the idea of a Treaty to ban nuclear weapons for some time. The Baptist Church, Church of Scotland, Methodist Church, United Reformed Church and Quakers have long-standing positions opposing nuclear weapons and have welcomed the Treaty. The Church of England passed a motion in 2018 calling for the Government to “respond positively” to the Treaty and in November 2020 31 Anglican Bishops signed an open letter calling on the UK to sign the Treaty. Many individual clergy members within the Catholic Church are also supportive of the Treaty.

Since the Treaty entered into force, nuclear weapons have been banned under international law in the same way as other weapons of mass destruction. All signatories are required to encourage other states to sign up to the treaty.

The TPNW is a comprehensive ban on nuclear weapons and other related activities. This includes: