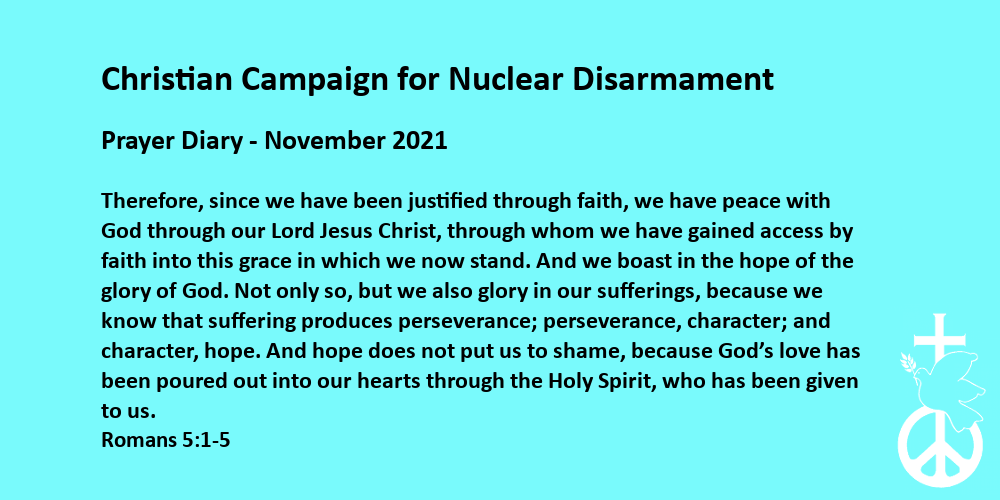 COP 26 Climate Summit
For in him all things were created: things in heaven and on earth, visible and invisible, whether thrones or powers or rulers or authorities; all things have been created through him and for him – Colossians 1:16
Global leaders are gathering in Glasgow for the UN Climate Talks known as COP26. With the consequences of climate change already being felt around the world, the urgency with which a deal is needed to limit global temperature rises is clear. Military activities, including the development of nuclear weapons, account for huge carbon emissions globally, yet are exempt from any plans to reach net-zero carbon emissions.

Global security situation
The Lord himself goes before you and will be with you; he will never leave you nor forsake you. Do not be afraid; do not be discouraged – Deuteronomy 31:8
Last month academics including Dr Lyndon Burford from King’s College London warned that the increase in nuclear arsenals and modernisations of capabilities which could lead to a nuclear war with “devastating global humanitarian, economic and ecological effects”. This is the backdrop to the news that China is apparently progressing with building silos which may be capable of launching long-range nuclear weapons in the future, while Republicans in the United States seek to remove limits of when American nuclear weapons could be used.

Treaty on the Prohibition of Nuclear Weapons
And hope does not put us to shame, because God’s love has been poured out into our hearts through the Holy Spirit, who has been given to us – Romans 5:5
Last month the Mongolian Parliament voted to approve the ratification of the TPNW, which would see Mongolia become the 57th state to join. In New York last month a vote on the TPNW during the First Committee was supported by 123 states with just 16, including the UK, opposing. This represents an increase of five states voting in support from the 2020 First Committee. Meanwhile the first meeting of States Parties – those who have ratified the Treaty, is due to take place in March 2022 having been moved to accommodate the Nuclear Non-Proliferation Treaty Review Conference, which is planned for January 2022.

Relations with Russia
Do not repay evil for evil or reviling for reviling, but on the contrary, bless, for to this you were called, that you may obtain a blessing – 1 Peter 3:9
Under the terms of the START Treaty – which limits nuclear weapons Russia and the United States can have deployed – figures released show that between them the two states had more than 2400 nuclear warheads deployed last year as well as 1500 launchers including submarines, air-launchers and bombers. Meanwhile Russia has announced that diplomatic relations with NATO has ended after 19 years of the NATO-Russia council. Russia has also announced that it will increase spending on the military generally and nuclear weapons specifically as part of an upgrade in capabilities.