This is a page for members to have their news, ideas, thoughts, letters publicised. Please feel free to send in your photos too.
You can contact us on christians@cnduk.org

This message comes, with my warmest congratulations and respects, as you take over as President of the United States.

Who am I?  A 91-year-old Englishman who was once a junior officer in our Royal Tank Regiment  and then spent nearly 30 years as an active Catholic parish priest and University Chaplain. I retired as a priest in 1987 and married in 1988.   For much of my life I have been deeply involved in work with various peace groups, in particular the Catholic organisation Pax Christi, the Campaign for Nuclear Disarmament and the International Peace Bureau.

The new UN treaty which came into force on 22nd January this year has made nuclear weapons illegal in about two thirds of the world.  Not that the message is a new one. The 1968 Non-Proliferation Treaty Article V1 obliges  the Parties ‘to pursue negotiations in good faith on effective measures relating to the cessation of the nuclear arms race at an early date and to nuclear disarmament….’ This has all been, at its best, a very slow process. I would like to suggest that the United States could easily take one immediate step which would accelerate it significantly.

As you will know, my country has a nuclear weapon system which it describes as ‘independent’. We are in fact spending at least £205 billion right now on another nuclear weapon generation— money which at this time would be much more usefully and sensibly spent on our National Health Service.

‘Independent’ these weapons will not be since we have to borrow, from the United States, the missiles on which to put our warheads.  It would considerably speed up the nuclear weapon elimination process if the United States ended the supply of these missiles to Britain.

National vanity is the real British reason for such expenditure. It was national vanity which started us on this road in the first place. Our Foreign Secretary in 1946, Ernest Bevin, then said, when calling for a British nuclear weapon…. ‘We’ve got to have the bloody Union Jack flying on top of it’.

Nuclear weapons bring no real peace to anyone.  The list of accidents involving nuclear weapons is a long and frightening one but little is ever said about them.  If you have time — which I doubt— get someone to bring you the September 1983 story about the courage of the Soviet Officer Stanislaus Petrov whose independent mind probably saved the world from disaster.

We need more such independent minds.

I wish you well with all your challenging responsibilities.

The warm wishes and prayers of many, including mine, are with you.

From Chris Harrison of Bristol, who sent us this article he wrote for the Dec/Jan issue of his church journal:

Our precious nation is facing its worst financial crisis since the Bank of England was first founded in 1694. The only way Chancellor Sunak can balance the books is to cancel the Trident renewal or replacement programme, which will cost £205 billion and set to rise.

The only answer is a national Renewal of prayer and faith. We must put our trust in God, and not in weapons of mass destruction.

It was King George IV who said in his 1939 Christmas Broadcast (quoting Minnie Louise Haskins); “Go out into the darkness and put your hand into the Hand of God. That shall be to you better than light, and safer than a known way. “It was (I believe), William Booth, founder of the Salvation Army, who said, “It is better to light a candle than to curse the darkness”. It is my prayer that we will all light a candle of Faith, Hope and Love, this Christmas 2020. 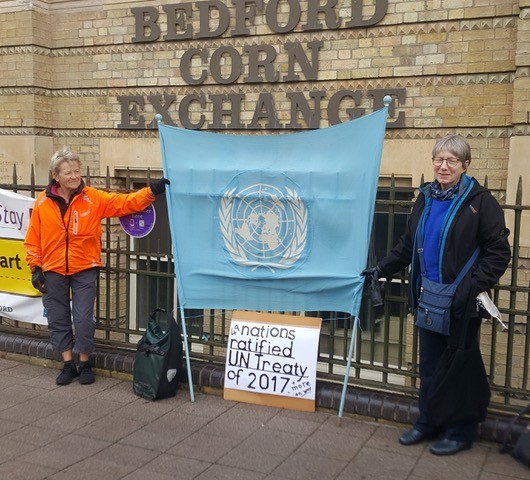 Saturday 24 October was United Nations Day and in Bedford people from the local Quaker Meeting, including Christian CND Co-Chair David Maxwell, took the message to the Market Square. The focus was on the UN’s 2017 Treaty on the Prohibition of Nuclear Weapons which called on states “never to develop, produce, manufacture, otherwise acquire, possess or stockpile nuclear weapons”.  It was announced this weekend that it has been ratified by 50 countries so that it is legally binding and comes into force on January 21st 2021. But nuclear nations, including the UK, have not done so. The pressure continues.

The United Nations offers an alternative to competition between countries essential in the face of climate change, pandemics and human rights abuses. Work both internationally and locally is needed to build a world in which no country claims status through nuclear weapons and where all countries have a voice which is heard.

It may haver been a very different way of marking the bombing of Hiroshima, but the service which took place in Chelmsford Cathedral on Thursday 6 August was incredibly moving for a number of reasons. Not only did this in attendance hear testimony from a survivor of the bombing and light a candle sent especially from Hiroshima, but there was also a chance to remember Beryl Lankester. Beryl was a long-standing member of Christian CND and had organised the Hiroshima service in Essex for more than 30 years, she sadly died earlier this year, having done much of the preparation for the service.

Due to the current restrictions there were around 30 people in attendance for the service. A testimony from a survivor of the bombing was read by local artist Yoko Wiffen and the message was delivered by the Bishop of Colchester, Roger Morris who spoke about the horrors of nuclear weapons and the hope for a future where they have been abolished.

There were also bible readings and a tribute to Beryl by her husband Roger. The service finished with the Christian CND hymn, Let us Raise our Voice. The event was a moving service for those who died but also a fitting tribute to the life and work of Beryl Lankester.

See photos from the service.

I didn’t have to go to Hiroshima to form the view that it cannot be right for the nations of the world to threaten each other with indiscriminate destruction.* But the visit had the effect of making me sense in a new and visid way the equivalent of J F Kennedy’s claim, in the shadow of the newly built Berlin Wall, that we were all citizens of Berlin; we are all, in that sense, citizens of Hiroshima/Nagasaki; we can put the thought out of our mind, as the Trident submarines are out of sight, but it remains our reality.

The image most people know, and the one I always had in mind, was of the mushroom cloud. But since Jan, my wife, and I visited Hiroshima two other images stand out. The commercial dome in the heart of Hiroshima city was not actually reduced to nothing; the struts of the dome remain, now preserved as a UNESCO heritage site. The bomb that killed tens of thousands of people left, under the epicentre of the explosion, the skeletal structure of the commercial dome; that explosion did not end everything and everyone, but it did take away the life that the structure had enabled. The decision to preserve the structure of the dome gives us an abiding image of the emptiness that this destructive weapon leaves behind.

It’s an easy walk along the peace garden to the museum dedicated to the explosion. There are moving, mostly brief, statements written by children shortly afterwards about the suddenness, the blindingness, the total shock of what happened on August 6, 1945. There are artefacts and pictures to show up clearly the unparalleled destructive power of the explosion. And then, when we emerged from the museum, we encountered groups of schoolchildren with clipboards, eager not just to try out their English but also to find out how we felt about their museum. Lots of stories of children too, best known perhaps the story of Sadako Sasaki who sought to make a thousand paper cranes hoping to ward off , succeeding in making just 644 before the leukaemia brought on by the radiation killed her.

Between the two experiences, the dome and the museum, there is a memorial to the tragedy. It was not a surprise to see there an undying flame. But I learned – and this became the abiding reflection of our visit – that the flame is not there primarily to remember the thousands of dead. It is there to burn until the last nuclear weapon is removed from the face of the earth. It is the flame – small and flickering by comparison with the explosive firestorms of 1945 – of hope for a nuclear-free world, a place where what overshadows us is not the fear of destruction but the hope for life, the hope that the children with their clipboards, and all the children of the world might awake to the power of peace rather than the horror that was nuclear destruction.

[*See my ‘Apocalyptic, Christian and Nuclear’ in Alan Race (ed),Theology against the Nuclear Horizon 1988]
Skip to content