NPT Review Conference
For I know the plans I have for you,” declares the LORD, “plans to prosper you and not to harm you, plans to give you hope and a future – Jermiah 29:11
The Nuclear Non-Proliferation Treaty Review Conference will finally take place in New York at the start of January after nearly two years of postponements and delays caused by the pandemic. The Conference is a change for states to review progress in bringing the vision of the Treaty, total global nuclear disarmament, into reality. Unfortunately for many years the talks at Review Conferences have been deadlocked and no progress has been made. Early signs from states including the USA and Russia indicate that once again this could be the case.

Global security situation
And the God of all grace, who called you to his eternal glory in Christ, after you have suffered a little while, will himself restore you and make you strong, firm and steadfast – 1 Peter 5:10
Belarus is apparently open to the idea of hosting Russian nuclear weapons according to news reports, in a move that would inevitably increase tensions in the region. Elsewhere there are reports that President Joe Biden is seeking to open a dialogue with China in light of the fact that Beijing appears to be joining other nuclear-armed states in seeking to expand and upgrade it’s arsenal. As talks on the Iran Nuclear Deal continue to stall the UK has said it will work “night and day” with Israel to prevent Tehran developing a nuclear capability.

Treaty on the Prohibition of Nuclear Weapons
Let us hold unswervingly to the hope we profess, for he who promised is faithful – Hebrews 10:23
Ahead of the First Meeting of States Parties of the TPNW, which will take place in Austria in March, Germany has announced that it will be attending as an observer. Germany is the second NATO Member State to make the move, joining Norway. It is hoped that it will encourage others to do the same and increase the pressure on the UK. Meanwhile there are around 6 states currently in the final stages of ratifying the Treaty, with more expected to complete the process in the coming weeks.

Peace work in 2021 and 2022
We remember before our God and Father your work produced by faith, your labour prompted by love, and your endurance inspired by hope in our Lord Jesus Christ – 1 Thessalonians 1:3
As 2021 draws to a close we reflect on another bury year of campaigning and rededicate ourselves to our work in the next 12 months. Despite the ongoing restrictions due to the pandemic we have seen the Treaty on the Prohibition of Nuclear Weapons enter into force, widespread Christian opposition to the government plans for an expanded nuclear arsenal in the UK alongside everything else we have achieved together. 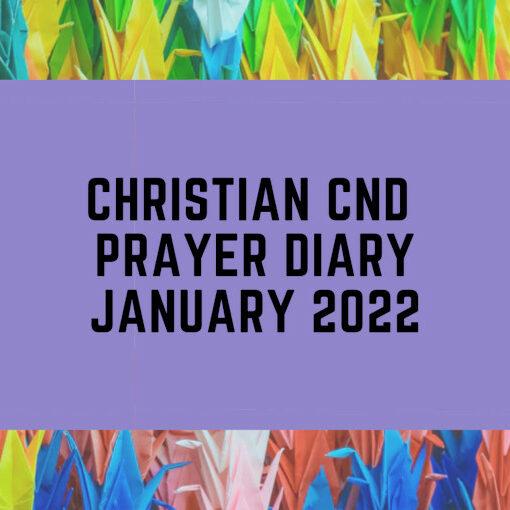