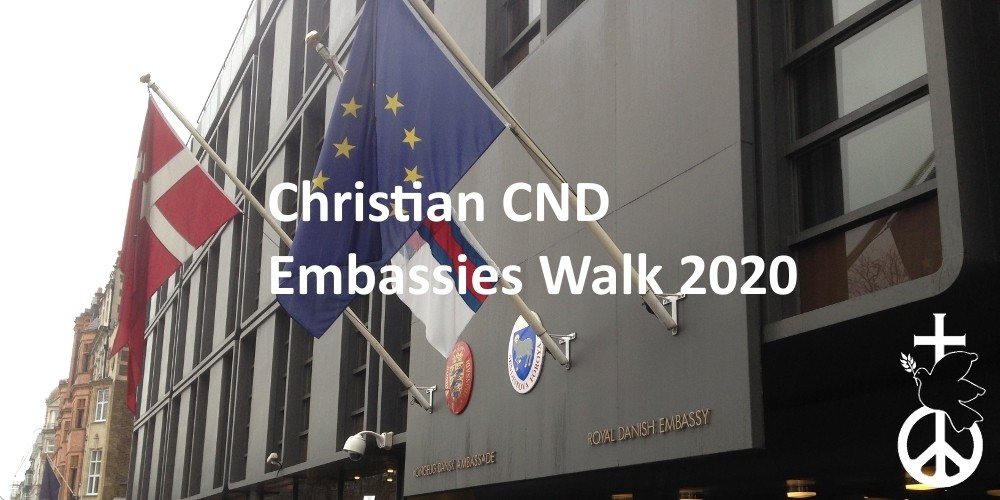 Every year Christian CND members and supporters gather in London to visit diplomatic missions and discuss issues around nuclear weapons policy. This is part of our on-going international work and has become a key date in our calendar.

Our experience throughout these events has been that states who oppose nuclear weapons are always glad to see activity in the nuclear-armed states. With international efforts on nuclear disarmament in a state of stalemate, it can sometimes feel to those states that there is no hope. Events like the Christian CND Embassies Walk give them hope for the future.

Last year we visited states that had signed the Treaty on the Prohibition of Nuclear Weapons, but had not yet concluded the ratification processes. We wanted to not only thank them for their leadership, but get an update on the domestic ratification. Soon after the event a number of the states we visited formally ratified the Treaty.

After the event we created a short a short video with some of the highlights. You can watch it below:

This year we are going to be visiting the Embassies of the non nuclear-armed NATO member states. As NATO is a nuclear-umbrella organisation, there is normally mixed opinion on moves aimed at nuclear disarmament. The Netherlands was the only NATO member state to attend the negotiations of the Treaty on the Prohibition of Nuclear Weapons following a motion passed by the Dutch parliament in support of attendance.

There has been a recent report by the Harvard Law School which calls on NATO members to join the new Treaty, which is set to come into force in the coming months. The report states that it is compatible with NATO membership to be a party to the Treaty, but would require a renouncement of the nuclear weapons doctrine. This is the message we will be taking to diplomats in March.

With 26 missions to visit, we need as many people to come with us as possible. We will be starting with a short service at St-Martin-in-the-Fields at 11am before sharing lunch together and heading off. We will be dividing into teams to cover the ground, and each team will be led by an experienced person, so there is no need to have done one of these walks before.

We hope to see you on Tuesday 12 March to continue our work towards a world free of nuclear weapons.