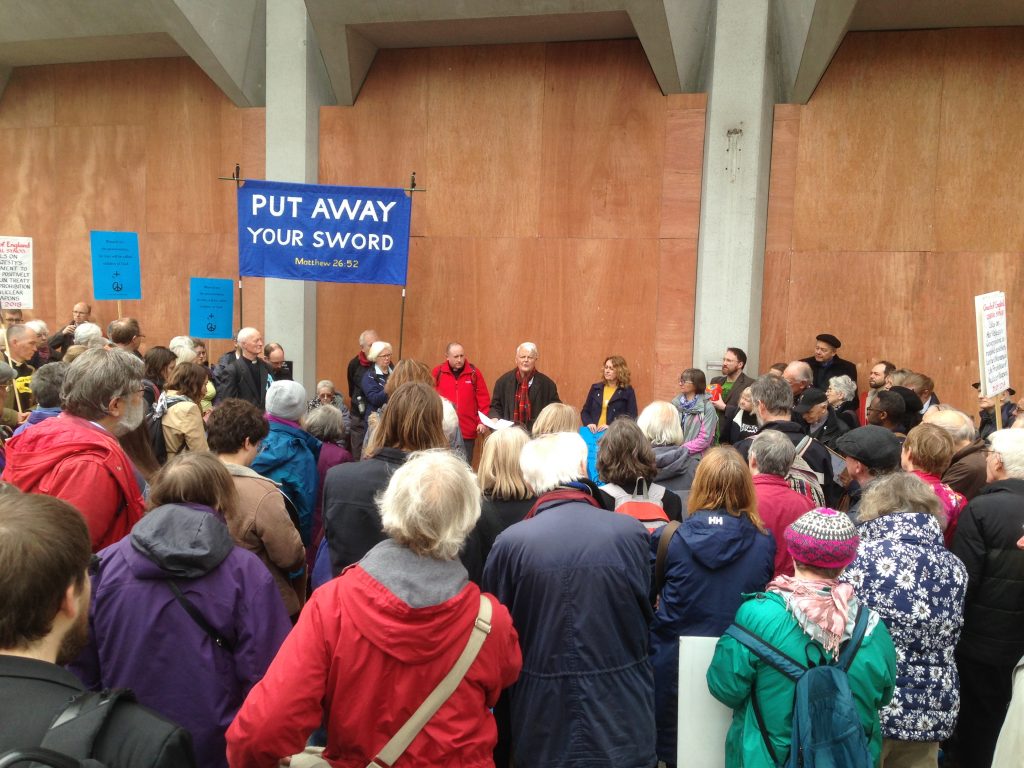 On Friday 3 May more than 150 Christians from across the country came together for a witness for peace outside Westminster Abbey. Inside Prince Williams was among those attending a National Service of Thanksgiving for 50 years of British nuclear weapons being at sea, described by the Royal Navy as a ‘celebration’.

Christian CND among others had called for the service to be cancelled. More than 200 Anglican clergy members signed our statement and more than 1000 people signed a petition to the Dean of Westminster. Unfortunately we were not able to prevent the service, but we were able to demonstrate the mainstream Christian view that nuclear weapons are nothing to be thankful for.

The event, which was supported by Pax Christi, Fellowship of Reconciliation, Church and State, Anglican Pacifist Fellowship, Community of Reconciliation and the Network of Christian Peace Organisations, included Bible readings, prayers and contributions from a range of denominations.

Along those taking part Revd Matt Harbage from London read Romans 12:9-18 while Alyson Peberdy from Oxford brought us Colossians 1:15-20. Paul Parker, Quakers in Britain Recording Clerk spoke about the contribution Quakers have made to peace and disarmament efforts throughout the past 60 years while Father Joe Ryan prayed for those submariners involved with the Trident programme. Bruce Kent led an act of repentance for the possession of nuclear weapons and the service finished with an impromptu rendition of Amazing Grace.

While we regret that the service took place, the strength of unity among Christians opposing nuclear weapons, along with the media coverage of the event including in Church Times and on Premier Christian Radio will really invigorate our campaigning for the coming season.